There’s much controversy that surrounds the creation and subsequent use of the atomic bomb by the United States against Japan during WWII. (Personally I think the potential  destruction of our planet is overkill (NO pun intended) and the moral implications following the destruction of innocent lives in Japan speak for itself. No matter where you stand, the following story is about one incident among the chaos that was the “creation of death ” that shows us the selflessness we’re  capable of.

I just learned of this remarkable man’s story yesterday, which is troubling to me. Being a native of New Mexico I’m very familiar with  all the rumors of secret government “goings-on” behind lock and key and automatic weapons under the cover of hollowed out mountains and underground bunkers. From the Rowell incident to the Manhattan Project, I’ve heard it all!

(being privy to “inside information” by geography  alone, I can tell you that most of the rumors are fact, truth).

This is why I am surprised I didn’t learn of this Canadian who came to my home (state) and selflessly took a lethal dose of radiation so others were saved. For me, this goes up there with the stories of our brave soldiers throwing themselves on a grenade so his brothers may live another day.

Louis’story hit close to home for me, literally. I thought I’d share it as a way to honor this brave Canadian brother of ours as well as all of Canada 🍁 by proxy.

Louis Slotin (1910-1946) was a Canadian scientist. Shortly after the war, he died from radiation sickness, contracted during a dangerous experiment conducted at Los Alamos.

Slotin received his Bachelor of Science and Master of Science from the University of Manitoba in 1932 and 1933, respectively. in July 1936, he was awarded a London University doctorate in bio-chemistry. He won a prize for his thesis, entitled “An Investigation into the Intermediate Formation of Unstable Molecules During some Chemical Reactions”. Following his work in London, he took a job as a research associate in Enrico Fermi’s lab at the University of Chicago, where he was assigned to work on cyclotrons.

In 1942, he was assigned to the Manhattan District, working at Chicago’s Metallurgical Laboratory. He was present on December 2nd, 1942 when Chicago Pile 1, the world’s first artifical nuclear reactor, went live. In December of 1944, Slotin was relocated to Los Alamos, to work in R.F. Bacher’s bomb physics group. He had previously done work at Oak Ridge with Eugene Wigner on plutonium production.

At Los Alamos, Slotin developed a reputation as a skilled bomb assembler, especially capable at putting together the bomb’s firing mechanism. He assembled the core of the Gadget, the bomb used at the Trinity test in 1945. He was also responsible for conducting criticality tests, which were used to determine the critical mass values of fissile materials. If something went wrong, such experiments could result in nuclear fission. Because of their danger, criticality tests were often referred to as “tickling the dragon’s tail.” 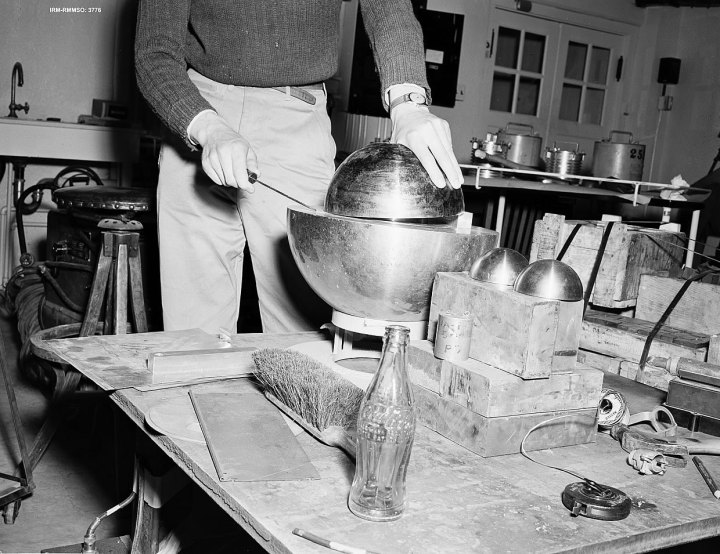 Slotin remained at Los Alamos after the end of the War. On May 21, 1946, he was in the process of conducting a criticality experiment to teach his colleague and eventual replacement, Alvin C. Graves, how they were done. The experiment involved slowly bringing together two berrylium-coated half spheres around a plutonium core, without allowing the two halves to touch. Slotin was using a screwdriver to keep the two spheres separated. As he slowly brought the two halves together, the screwdriver suddenly slipped; a bright blue flash filled the room. Slotin at once threw his body in front of the sphere, to shield his fellow scientists, and yanked the two half-spheres apart. In the process, he received almost 1000 rads of radiation, far over the lethal dose.

Slotin died 9 days later, after suffering the effects of radiation poisoning. His death led to increased safety standards in nuclear laboratories, as well as commendations for his heroic sacrifice to save the other scientists.

One year later, the U.S. military detonated this plutonium “demon core” at the Bikini Atoll in the Pacific Ocean. But the legacy of the demon core — and its victims — has endured.

The underwater “Baker” explosion (not the demon core) at Bikini Atoll in July of 1946.

To learn more about these experiments, you can take a look at this article (PDF) from Los Alamos National Laboratory.

3 thoughts on “The Manhattan Project’s Angel”