War has a way of leaving it’s eternal mark on anything (anyone) it touches. Not only are the Soldiers of war left with its scars–most that cannot be seen–the landscapes where millions lost their lives are haunting reminders of a time, not long ago, when our world was at war.

It’s been said that if we were to lay the trenches of WWI out in a straight line, it would circles the globe. That’s a lot of trenches; That’s a lot of digging.
One distinct feature still seen today is the zigzag pattern used by all–not only in Europe but all over the region including middle eastern countries like Jerusalem and Bagdad–this jagged pattern was used so  in the event of enemy infiltration, there was always a “wall” in which the Soldiers could take cover. They also had to serve as living spaces, where the troops could eat, sleep, and of course use the restroom.

Below are two images, one is of The Lochnagar Crater, in France. And other is The Soccer Ball Kicked Across No Man’s Land, and first hand accounts of each. 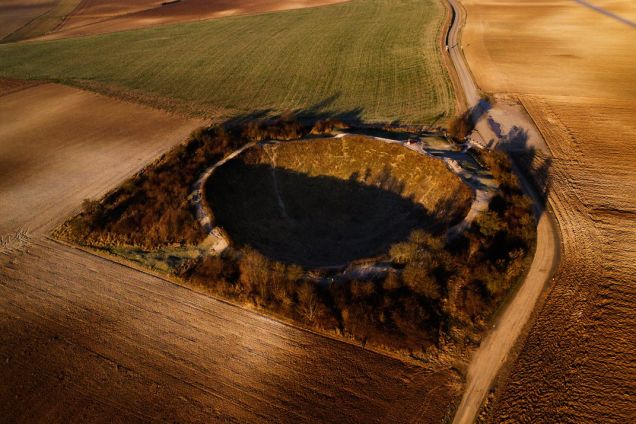 At 7:28 AM on July 1st, 1916 — the first day of the Battle of the Somme — British forces detonated 24 tons of ammonal (an explosive made up of ammonium nitrate and aluminium powder) in a packed mine underneath German forces. The explosion, which was reportedly heard in London, was witnessed from the air by 2nd Lieutenant C.A. Lewis of No. 3 Squadron RFC:

The whole earth heaved and flashed, a tremendous and magnificent column rose up in the sky. There was an ear-splitting roar drowning all the guns, flinging the machine sideways in the repercussing air. The earth column rose higher and higher to almost 4,000 feet. There it hung, or seemed to hang, for a moment in the air, like the silhouette of some great cypress tree, then fell away in a widening cone of dust and debris.

The crater remains to this day, running nearly 70-feet deep.

Here is a shot of one of the most iconic items from WW1: this is a football kicked into action by a British Regiment – The London Irish Rifles – as they attacked German trenches,” St. Maur Sheil told io9. “They kicked this football ahead of them and charged after it. It is shot on the actual ground where this action took place.” The football was kicked by the LIR across No Mans Land on Sept 25th 1915 as they attacked the German positions in the town of Loos.

In regards to the soccer ball picture, the following description was written by Patrick Macgill who achieved fame after the war as a poet and writer and who was a stretcher bearer during the battle:

I peered over the top. The air blazed with star-shells, and Loos in front stood out like a splendid dawn. A row of impassive faces, sleep-heavy they looked, lined our parapet; bayonets, silver-spired, stood up over the sandbags; the dark bays, the recessed dug-outs with their khaki-clad occupants dimly defined in the light of little candles took on fantastic shapes. From the North Sea to the Alps stretched a line of men who could, if they so desired, clasp, one another’s hands all the way along. A joke which makes men laugh at Ypres at dawn may be told on sentry-go at Souchez by dusk, and the laugh which accompanies it ripples through the long, deep trenches… until it breaks itself like a summer wave against the traverse where England ends and France begins.

Many of our men were asleep, and maybe dreaming. What were their dreams? . . . I could hear faint, indescribable rustlings as the winds loitered across the levels in front; a light shrapnel shell burst, and its smoke quivered in the radiant light of the star-shells. Showers and sparks fell from high up and died away as they fell. Like lives of men, I thought, and again that feeling of proximity to the enemy surged through me.

A boy came along the trench carrying a football under his arm. “What are you going to do with that?” I asked.

“We’re going to kick it across into the German trench.”

“It is some idea,” I said. “What are our chances of victory in the game?”

“The playing will tell,” he answered.

It was now grey day, hazy and moist, and the thick clouds of pale yellow smoke curled high in space and curtained the dawn off from the scene of war. The word was passed along. “London Irish lead on to assembly trench.” The assembly trench was in front, and there the scaling ladders were placed against the parapet, ready steps to death, as someone remarked. I had a view of the men swarming up the ladders when I got there, their bayonets held in steady hands, and at a little distance off a football swinging by its whang from a bayonet standard.

Ahead the clouds of smoke, sluggish low-lying fog, and fumes of bursting shells, thick in volume, receded towards the German trenches, and formed a striking background for the soldiers who were marching up a low slope towards the enemy’s parapet, which the smoke still hid from view. There was no haste in the forward move, every step was taken with regimental precision, and twice on the way across the Irish boys halted for a moment to correct their alignment. Only at a point on the right there was some confusion and a little irregularity. Were the men wavering? No fear! The boys on the right were dribbling the elusive football towards the German trench.

By the German barbed wire entanglements were the shambles of war. Here our men were seen by the enemy for the first time that e and roving that makes up the life of a soldier gone for ever. Here, too, I saw, bullet-riddled, against one morning. Up till then the foe had fired erratically through the oncoming curtain of smoke; but when the cloud cleared away, the attackers were seen advancing, picking their way through the wires which had been cut to little pieces by our bombardment. The Irish were now met with harrying rifle fire, deadly petrol bombs and hand grenades. Here I came across dead, dying and sorely wounded; lives maimed and finished, and all the romancof the spider webs known as chevaux de frise, a limp lump of pliable leather, the football which the boys had kicked across the field.