Waging war is a risky, all-encompassing endeavor physically, emotionally, and psychologically. It displays humankind at its best and at its worst, and the war fighter’s slang reflects the bitter, terrible, and inspiring all of it. A quick scan of these phrases illustrates the spectrum: disciplined bravado provides the glitz and glamour; earned camaraderie, the sincerity and warmth; irony, the realist’s edge; scorn, the punishing barb; and insistent vulgarity, a rowdy,leveling earthiness. A little verbal bravado and swagger has genuine utility. Hollywood bravado is little more than chest thumping bluster, but seasoned vets know that disciplined bravado indicates confidence and courage.

Physical and moral courage and the confidence they create are essential warrior virtues. But God—or the first sergeant—help the fake macho and especially the “REMF,” “fobbit,” or “suit” who talks the talk but hasn’t walked the walk.

**NOTE: There are terms in these lists that could be considered NSFW.

VIA: Glossary of Military Slang 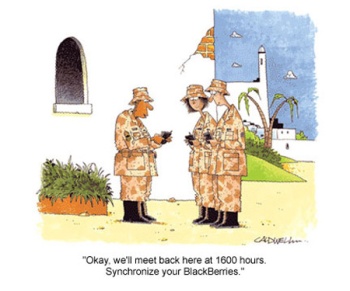 Definition of Zulu Time or GMT

The Department of the Navy serves as the country’s official timekeeper, with the Master Clock facility at the U.S. Naval Observatory, Washington, D.C.

“Zulu” time is that which you might know as “GMT” (Greenwich Mean Time). Our natural concept of time is linked to the rotation of the earth and we define the length of the day as the 24 hours it takes the earth to spin once on its axis.

As time pieces became more accurate and communication became global, there needed to be a point from which all other world times were based. Since Great Britain was the world’s foremost maritime power when the concept of latitude and longitude came to be, the starting point for designating longitude was the “prime meridian” which is zero degrees and runs through the Royal Greenwich Observatory, in Greenwich, England, southeast of central London. As a result, when the concept of time zones was introduced, the “starting” point for calculating the different time zones was/is at the Royal Greenwich Observatory. When it is noon at the observatory, it is five hours earlier (under Standard Time) in Washington, D.C.; six hours earlier in Chicago; seven hours earlier in Denver; and, eight hours earlier in Los Angeles.