Here’s some History some of you may not be familiar with. Interesting how politics have always made ‘ordinary’ men make a deal with the devil.

One of the most famous personal conflicts in American history, the Burr–Hamilton duel (a draw duel) arose from a long-standing political and personal bitterness that had developed between the two men over the course of several years. Tensions reached a boiling point with Hamilton’s journalistic defamation of Burr’s character during the 1804 New York gubernatorial race in which Burr was a candidate. Fought at a time when the practice was being outlawed in the northern United States, the duel had immense political ramifications. Burr, who survived the duel, was indicted for murder in both New York and New Jersey, though these charges were later either dismissed or resulted in acquittal. The harsh criticism and animosity directed toward him following the duel brought an end to his political career. The Federalist Party, already weakened by the defeat of John Adams in the Presidential Election of 1800, was further weakened by Hamilton’s death.

The duel was the final skirmish of a long conflict between Democratic-Republicans and Federalists. The conflict began in 1791 when Burr captured a United States Senate seat from Philip Schuyler, Hamilton’s father-in-law, who would have supported Federalist policies. (Hamilton was Secretary of the Treasury at the time.) When the Electoral College deadlocked in the election of 1800, Hamilton’s maneuvering in the House of Representatives caused Thomas Jefferson to be named president and Burr vice-president. In 1800, the Philadelphia Aurora printed extracts from a pamphlet Hamilton had earlier published, “Letter from Alexander Hamilton, Concerning the Public Conduct and Character of John Adams, Esq. President of the United States,” a document highly critical of Adams, which had actually been written by Hamilton but intended only for private circulation. Some have claimed that Burr leaked the document, but there is no clear evidence for this, nor that Hamilton held him responsible. END_OF_DOCUMENT_TOKEN_TO_BE_REPLACED

USS Nimitz (CVN 68) recently moved from San Diego to the state of Washington, initially to undergo scheduled maintenance but then for permanent assignment. Join her crew and their families as they make this transition in episode one of this documentary, shot and edited by Nimitz Sailors.

On this day in 1791, Virginia becomes the last state to ratify the Bill of Rights, making the first ten amendments to the Constitution law and completing the revolutionary reforms begun by the Declaration of Independence. Before the Massachusetts ratifying convention would accept the Constitution, which they finally did in February 1788, the document’s Federalist supporters had to promise to create a Bill of Rights to be amended to the Constitution immediately upon the creation of a new government under the document.

The Anti-Federalist critics of the document, who were afraid that a too-strong federal government would become just another sort of the monarchical regime from which they had recently been freed, believed that the Constitution gave too much power to the federal government by outlining its rights but failing to delineate the rights of the individuals living under it. The promise of a Bill of Rights to do just that helped to assuage the Anti-Federalists’ concerns. END_OF_DOCUMENT_TOKEN_TO_BE_REPLACED

A Marine officer at Camp Pendleton has received a Silver Star for bravery and leadership during an attack by Taliban fighters on a coalition airbase in Afghanistan. 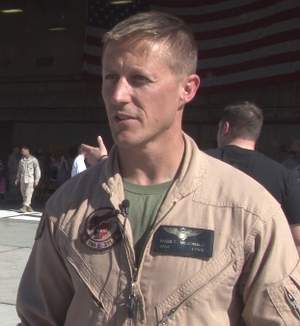 Maj. Robb T. McDonald received the medal for actions during the Sept. 14, 2012, attack on the Camp Bastion airbase in Helmand province that left two Marines dead and a dozen aircraft destroyed or damaged.

McDonald, 37, a Harrier pilot, was executive officer of Attack Squadron 211 from the 3rd Marine Aircraft Wing, when 15 Taliban breached the defenses of the sprawling airbase under the cover of darkness and began destroying aircraft. END_OF_DOCUMENT_TOKEN_TO_BE_REPLACED

CAMP PENDLETON, CA – Marines from the Lone Star State are enraged today after reports emerged indicating that one of their own does not relentlessly announce his Texas heritage to everyone within earshot.

Lance Corporal Stuart G. Shaw, a Rifleman with 1st Light Armored Reconnaissance Battalion, is receiving unfriendly fire after it was revealed that he was a native Texan—something he failed to announce on his own. Shaw, who was born and raised in San Marcos, Texas, says the whole controversy is being blown out of proportion. END_OF_DOCUMENT_TOKEN_TO_BE_REPLACED

Starting on Christmas Eve, many German and British troops sang Christmas carols to each other across the lines, and at certain points the Allied soldiers even heard brass bands joining the Germans in their joyous singing.At the first light of dawn on Christmas Day, some German soldiers emerged from their trenches and approached the Allied lines across no-mans-land, calling out “Merry Christmas” in their enemies native tongues. At first, the Allied soldiers feared it was a trick, but seeing the Germans unarmed they climbed out of their trenches and shook hands with the enemy soldiers. The men exchanged presents of cigarettes and plum puddings and sang carols and songs. There was even a documented case of soldiers from opposing sides playing a good-natured game of soccer. END_OF_DOCUMENT_TOKEN_TO_BE_REPLACED